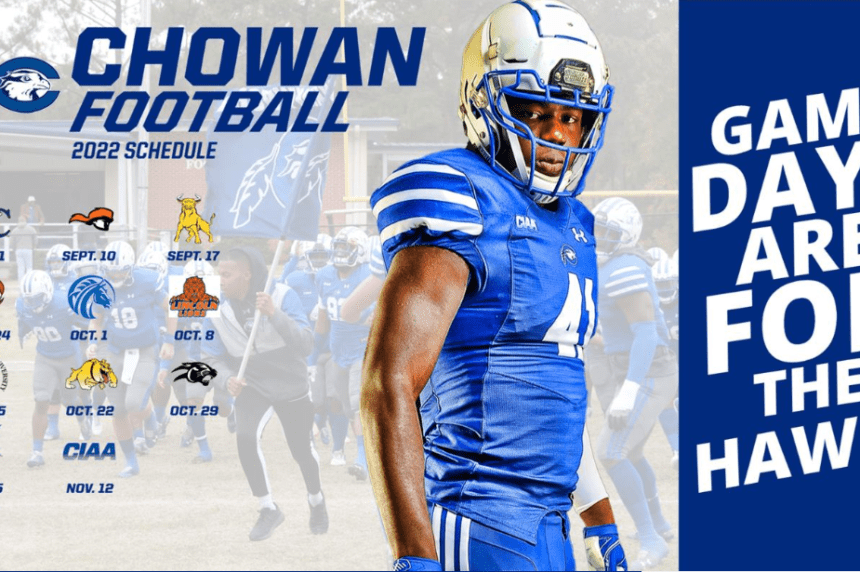 The Hawks posted a NCAA-era record 7-3 with a 4-3 mark in CIAA play.  Chowan would pull in the hardware with the CIAA Offensive Player of the Year, CIAA Defensive Rookie of the Year, and 10 All-CIAA selections.

Chowan will start the season under the lights against Barton on Thursday, September 1.  The Bulldogs posted a 6-5 overall record in their first full season of competition, knocking off nationally-ranked Wingate along the way.  Barton pounded the ground on their way to 2775 yards and 26 touchdowns behind Jordan Terrell, second in the country in rushing.

The Blue and White will host Tusculum in the home-and-home on September 10.  The Pioneers were handed a 46-38 double overtime loss in 2021.  Tusculum finished the season 5-6.

The CIAA slate will open with the Hawks hosting Johnson C. Smith on September 17.  The Golden Bulls finished the 2021 season with a 1-7 record and 1-5 mark in CIAA play.  The Hawks are 3-1 against JCSU winning their last three meetings including a 10-7 victory in 2017.

Then, Chowan will welcome Winston-Salem State back to Garrison Stadium on September 24 to wrap up the homestand.  The Rams came to Murfreesboro last season after altering their schedule for a FCS contest.  Chowan would take the victory 73-7.

The first road contest of the season will feature the five-time defending CIAA Southern Division champions, Fayetteville State, on October 1.  The Broncos lead the series 6-4 and has won their last three meetings with the Hawks.  Aside from the 2019 meeting, the previous three meetings were decided by a combined six points.

The CIAA Northern Division slate has changed as the Hawks travel to Lincoln on October 8.  This marks the first time since the 2011 season that the two teams will meet prior to the final game.  Chowan picked up the win 28-12 to improve to 10-1 against the Lions all-time.

Virginia State will be the opponent for the Hawks on October 15 as the Blue and White celebrate Homecoming.  Chowan gutted out a 38-30 victory on the road in the meeting in 2021.

Chowan will then face Bowie State, NCAA Division II Sweet 16 appearance, on October 22 followed by a trip to Richmond, Va. to take on Virginia Union on October 29.

The Hawks wrap up the regular season with rival, Elizabeth City State, on November 5.  This meeting will mark the first time the rivalry game will be the last game of the regular season.  The date with the Vikings will also be Senior Day and Hall of Fame for the Hawks.

Chowan will look to continue their success from the 2021 season as an appearance in the 2022 CIAA Football Championship, would occur on November 12 in Salem, Va.

Full schedule can be found here.