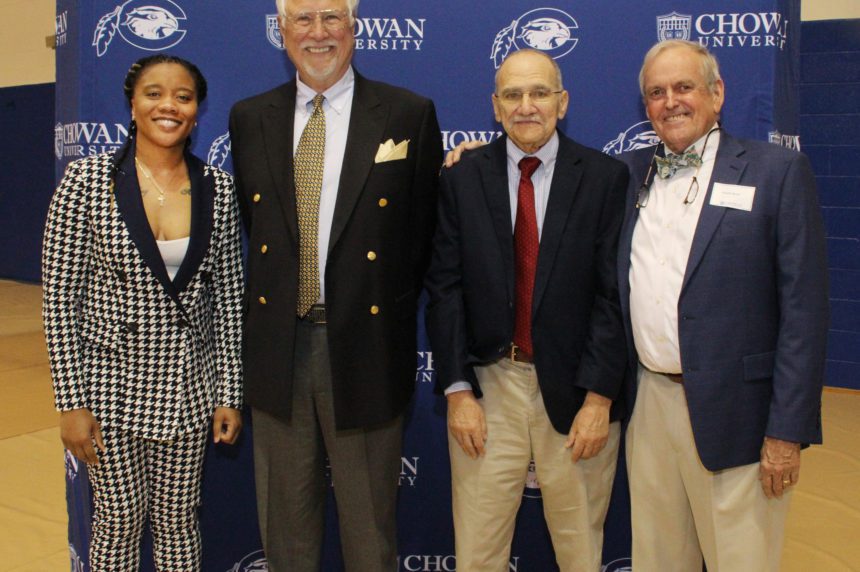 Four of the five newest members of the Chowan University / Jim Garrison Sports Hall of Fame are, from left, Kara Jackson, Dr. Scott Colclough, Jack Goldberg, and Frank Rose. They were inducted on April 1 at an on-campus banquet that was delayed from November of last year due to COVID-19. Staff Photo by Cal Bryant
Athletics, Campus News

It took a bit longer than anticipated, but the five newest members of the Chowan University / Jim Garrison Sports Hall of Fame were formally inducted here Friday evening.

They were introduced on Nov. 6, 2021 at halftime of Chowan’s annual Hall of Fame football game, but a banquet scheduled for that evening was postponed due to indoor restrictions with the COVID-19 pandemic.

“We’re now celebrating in person with events on campus; we’re hopeful this is a sign of a return to normal,” said Chowan University President Dr. Kirk Peterson.

Dr. Peterson referenced the namesake of the university’s Sports Hall of Fame, the legendary Jim Garrison who was Chowan’s longtime football coach and athletic director.

“We have an impressive class to induct tonight,” Peterson continued. “Each inductee has proven excellence and dedication and deserves this honor. I commend each of you for your loyalty, integrity, morality, grit, time commitment, and determination that led to your Hall of Fame induction.”

Colclough was first hired at Chowan in 1979 where he served as the Head Resident Director of Parker Hall and as an assistant coach for football and basketball. After leaving the school in 1982, Colclough returned 10 years later to help the junior college transition from two year to four year status. He became the favored professor of many loving students and served as a mentor to many while at Chowan and is known to have laid the foundation for the SSPE department at Chowan as a four year institution.

“Each class we induct adds to the significance and prestige of the Hall of Fame,” Peterson noted. “We all miss coach Garrison, but he still lives within us.

He called his induction, “a humbling experience, knowing all the great coaches, student-athletes, administrators and friends of this university who have preceded me.”

“I spent three of my best years coaching here,” Colclough recalled. “Jerry Smith (Chowan’s former men’s basketball coach) invited me here. I served as his assistant coach. He told me I needed to coach football as well, so that’s when I worked with coach [Jim] Garrison. We hit it off immediately and got a chance to work with a lot of great athletes, to include our East Bowl championship in 1981.”

During Colclough’s time as a football assistant coach, Chowan had four defensive ends to earn All-American honors. Two of those went on to play in the NFL.

Colclough became emotional when remembering those at Chowan who made such an impact on his career.

“They made me a better person,” he said, choking back the tears. “I don’t want to call their names in fear of missing someone. It’s just great to be back on campus to see you all. It’s been quite a homecoming. Thank you for this humbling recognition.”

A former radio broadcaster who spent time as the play-by-play announcer for Chowan football and men’s basketball, Goldberg joined the Chowan staff in 1989 as Sports Information Director, assistant to Athletic Director, director of the Hawks Athletic Center, and Executive Secretary of the Braves Club. The following year he became coach of the softball team. There he helped transition the team from junior college status to four year NCAA DIII status. Goldberg was named Region 10 Coach of the Year in their final year of Junior College.

He thanked his family, friends, former players, and coaching mentors for helping him along the way.

“If it wasn’t for them none of this would have been possible for me,” Goldberg stressed.

“The person who should be up here and accepting this honor is my best friend and wife of 43 years, Myrna,” he continued. “She has been my rock and my biggest supporter. A coach’s wife has a tough task. She took on the responsibility of raising our two wonderful kids, and me. She provided love for our family.”

He credited his “Chowan family, those I love and respect…coach Garrison and Dr. [Bruce] Whitaker (Chowan’s former president), they gave me guidance; and coach [Bob] Burke (the former men’s basketball coach) who gave me the most sound advice. He told me I needed to know the game to coach the game. I went to as many coaching clinics as I could in order to gain more knowledge about coaching fast-pitch softball. There were others who guided me…coach [Jerry] Hawkins and coach [Janet] Collins.”

Goldberg added that he also heeded coach Burke’s advice about recruiting not only great athletes, but outstanding students as well.

“For five consecutive years, our softball program had the highest GPA of any athletic program here on this campus,” he noted. “That is something I was very proud of.”

He credited his players and his volunteer coaches for Chowan’s success on the field. The then Braves averaged over 25 wins a season. The 1995 squad still own the highest, single season winning percentage with a 36-9 record.

Goldberg coached several All-Region and All-American players during his tenure. Five of his former players are members of the Jim Garrison/Chowan University Sports Hall of Fame.

“I have so many great memories of Chowan,” said Goldberg. “We always talked about being a family. That’s what Chowan was and still is. I cherished my time here at this great university. Thank you so much for this honor.”

Hagler was unable to attend Friday’s banquet. He did make remarks via a video message.

“I want to congratulate my fellow inductees; it’s an honor to share this opportunity with you all,” Hagler stated. “This means so much to me entering the Jim Garrison / Chowan University Sports Hall of Fame. He was such an inspiration to me and my teammates.”

He thanked his mom and dad for their love and support as well as following his exploits on baseball diamonds since he was five-years-old. He offered his thanks to Chowan baseball coaches Steve Flack, Aaron Carroll, and Taylor Furlough.

“I love looking back on my time at Chowan and remembering all the friendships that were made. Those truly were some of the greatest days of my life,” he concluded.

At one time, Hagler held the Chowan / DIII program record for career homeruns (23), career runs scored (147), and still leads the record book in career stolen bases (101). Over his career he tallied a .586 slugging percentage, 194 career hits, 31 career doubles, and 105 runs batted in.

Jackson, who is currently the assistant coach for Chowan’s women’s basketball team, first came to Murfreesboro in 2002 as a student-athlete. In her four years, Jackson provided a spark at both ends of the floor as the program’s all-time leader in assists (447) and steals (264). In addition, Jackson still ranks sixth in Chowan’s Division III history with 820 career points and ranks third in career 3-point field goals made (96) and sixth in field goals made (289). During the 2003-04 season, Jackson and company clinched the USA South Regular Season title and finished as the USA South Conference Tournament Runner-Up.

Jackson gave thanks to God for all she has accomplished in life.

“I’m so humbled to stand here in front of family, friends, and the new Hall of Fame members,” Jackson said. “I thank my parents for putting me in a position to be all that God has desired me to be. I’m saved, I have two degrees, own a business, coach at one of the highest levels of basketball, and I’m being inducted into the Hall of Fame. If that doesn’t deserve some good parenting bragging rights, I don’t know what does.”

Jackson went on to offer thanks to other members of her family, her friends, and her former basketball coaches for shaping and molding her along life’s journey.

“You didn’t give up on me, and I thank you for that,” she noted.

Jackson said found an old journal detailing her life as a student-athlete at Chowan.

“My life here prepared me for what God was doing in my life,” she said. “From reading that journal I realized I’m still growing, but that [growth] is paying off.

“As a student, I will forever cherish the memories here at Chowan as well as the memories I’m now building here as a basketball coach. Thank you for taking me in and loving me for who I am,” Jackson concluded.

Rose, the retired former owner of Rose Brothers Paving Company in Ahoskie, first began his service to Chowan in 1988 as a member of the Board of Trustees. He went on to serve 10 years as the board’s chairman, the longest such tenure in the history of the school.

His dedication to Chowan has always been guided by a keen sense of helping others obtain a quality education while understanding the need for strong academics, facilities and athletics. This has been achieved through his support of academic scholarships and capital projects. The Rose Family Tennis Complex is among the athletic facilities on campus.

Rose said as a member of Chowan’s Board of Trustees, he and his colleagues always kept the best interests of the university, the students, the athletes, and the staff at the top of their priority list.

“The young men and women who came here received a solid Christian education,” Rose remarked. “When they left here they were better people, going out to hopefully make a better world. That’s what higher education is, an opportunity to learn, to grow, to achieve.

“I thank Chowan for this award, but more importantly I thank them for allowing me to serve and be a part of Christian excellence and showing me avenues of giving and enrichment, for trusting my judgment and having confidence in my leadership. Thank you to my family, my friends, and to the greater Chowan University,” he concluded.