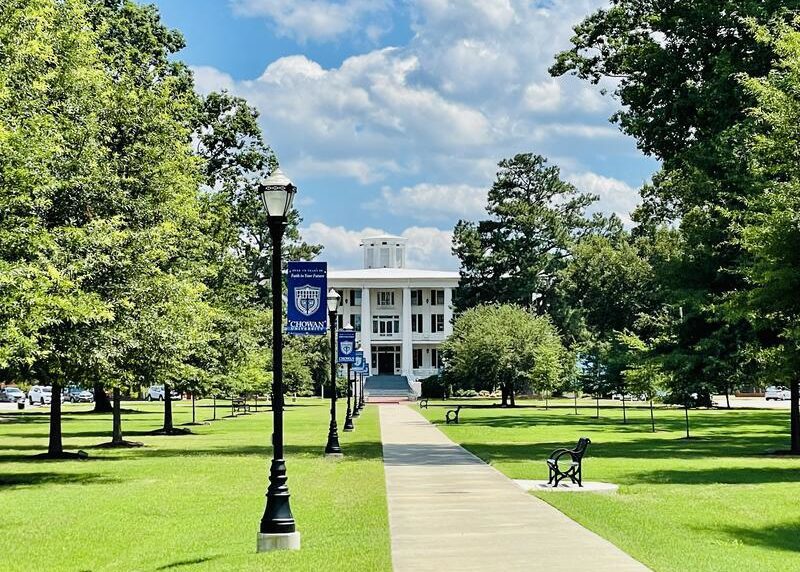 Board of Trustees Honors Two with Emeritus Status

The Chowan University Board of Trustees authorized emeritus status for two faculty members, John Davis and Amy Wethington. This honor is bestowed by the University to recognize a recently retired professor’s dedication and distinguished career at Chowan.

Professor John Davis, Distinguished Professor of English, had an impressive forty-year career teaching at Chowan before retiring in May 2021. Davis estimates he has written over 40 essays on a multitude of Twain topics and stories. He has been published in the Mark Twain Annual, Mississippi Quarterly, American Literary Realism, and the Mark Twain Encyclopedia. In 1996 the senior class chose Dr. Davis as Commencement Speaker, in 2006 he was inducted to the Order of Lux Veritas, in 2013 he was awarded the McDowell Columns Scholar Prize. In recognition of Professor Davis’ long and committed service to Chowan University and his profession in the areas of teaching, advising, and service, the Board of Trustees grants Professor Davis the title and position of Professor Emeritus of English, with the all the rights, privileges, and responsibilities pertaining thereto.

Professor Amy Wethington, Professor of Biology, taught at Chowan for sixteen academic years, ending her career in May 2021. Some of the courses she taught at Chowan were Microbiology, Animal Behavior, Invertebrate Biology, Biochemistry, Directed Research, and General Biology.  She has served as a Research Associate at the Carnegie Museum of Natural History and been a part of over twenty publications. In 2018 she was the recipient of the Chowan University McDowell Columns Scholar Prize. In recognition of Professor Wethington’s long and committed service to the University and her profession in the areas of teaching and research, the Board of Trustees confers upon Professor Wethington the title and position of Professor Emeritus of Biology, with all the rights, privileges, and responsibilities pertaining thereto.

“Professor emeritus status is designed to honor a professor who has served the university with distinction over a period of years through retirement, and all three have made significant contributions to their academic area and the University as a whole,” said Dr. Danny Moore, Vice President of Academic Affairs and Provost. “We are grateful for their service to Chowan and are honored to bestow this distinction.”