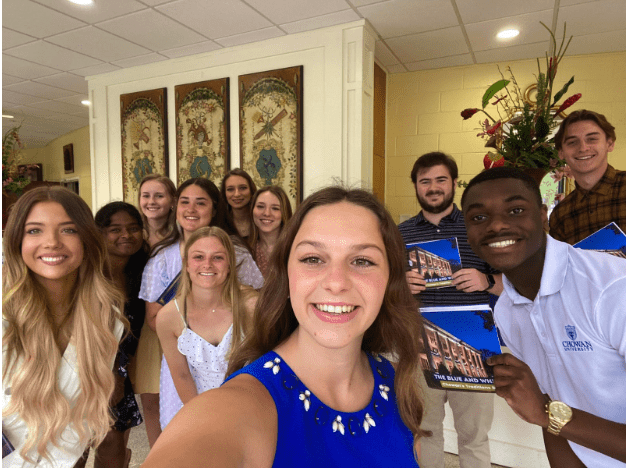 First-year honor students have notably left their mark at Chowan by completing their semester assignment with the production of The Blue and White: Chowan’s Traditions Book. Students in the 2022 spring Honors First-Year Experience class spent the semester pouring over old yearbooks, student newspapers, and catalogs; as well as reading Chowan histories to distill the top “48” current traditions.

Included in the fifty-nine pages of this book is a Chowan timeline from Chowan’s founding as a Female Institute in 1848 to March 2020 with the Chowan’s response to the pandemic. Two pages highlight past traditions like the Rat Day, May Day, and Chowan’s athletic team’s former nickname the “Braves.” In researching these items, “the list was longer than what was reasonable to include,” shared Provost and class professor Dr. Danny Moore. Discussion and debate narrowed the choices.

The rest of the book focuses on the most current traditions. This list too had to be culled with robust debate. The optimal number for inclusion was “48,” which was a way of honoring Chowan’s birth year of 1848. The remainder of the book names and defines each tradition along with pictures. Some traditions included are Fried Chicken Tuesday, Ringing the Bell, and painting the senior rock outside of Penny Hall.

The project started with the recognition that Chowan needed a traditions book. So over ten class sessions and students putting in hours outside of the class to fulfill this need. In designing this book, the new Chowan University Brand Book was used for colors and font choices.  With this as the students’ guide, a very professional book was produced.

The students unveiled their work at the Chowan Student Research Conference on April 12. Student Erica Mock led the presentation. Later she shared, “I hope this book will be a base for our traditions and that in ten years, another class will be to add to it.” Along with creating a needed item Dr. Moore said of the book creation, “this is one of the most positive experiences I have had working with students on a project, mainly because I watched them ‘grow’ into it and take ownership of it.”

View the completed Blue and White Chowan University Traditions book below, or go to this link.