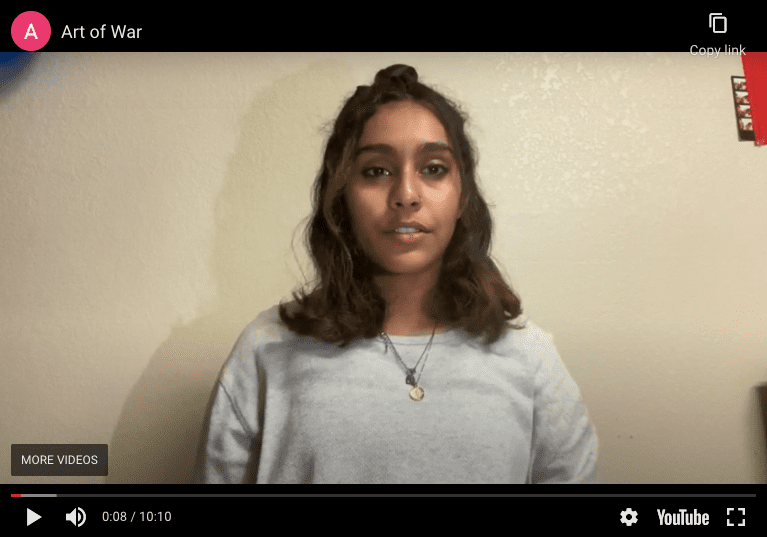 On Saturday, November 13 Asuntha Fleming and Glenn Jordan, two English majors at Chowan, presented at this year’s State of North Carolina Undergraduate Research and Creativity Symposium (SNCURCS). The symposium was held virtually again this year with 320 presentations from over 30 institutions.

Asuntha Fleming, a junior majoring in English with a minor in psychology, presented her topic “The Art of War.” Below is the abstract from her paper:

The Great War witnessed the rise of British soldiers who shared their experiences through the art of poetry, conveying personal stories and emotions. Amidst the mutiny and bloodshed, poets like Wilfred Owen and Rupert Brooke rose to fame through their power of wordplay and vivid imagery. While Brooke’s “The Soldier” was famed for its positivity, Owens “Dulce Et Decorum Est” was discernibly negative. The poems that emerged during this period were focused mainly on patriotism and dedication. Although, “The Soldier” and “Dulce Et Decorum Est” focus on the common theme of war, they convey different emotions and ideas. There is a change in the writing style along with a shift of perspective as one talks about a soldier’s undying love for his motherland, while the other brings out the horrors of war. The poems express unfiltered emotions as these soldiers experienced the disaster firsthand. Undoubtedly, The Great War caused a lot of havoc and destruction, but also put poets like Brooke and Owen on a pedestal to either portray it as a selfless act of passion or intensify it as inhumane mass murder. Either way, through their heart-wrenching experiences, both these poets present two sides of the most unprecedented war in history.

Glenn Jordan, a senior English major with a concentration in Creative Writing presented on the “Ultimate Connection.” Below is the abstract from his presentation:

The Human Hive-mind, the Information Superhighway, the internet has gained many names over the years. Its prominence grew from being seen as a neat idea most people couldn’t comprehend to a daily necessity with studies concerned about people spending too much time on the internet. The most important aspect of the internet is the ability to communicate with others from across the world in real-time. The play Water by the Spoonful takes a daring leap and incorporates a chatroom into its staging and action. An unconventional decision, it was even more so ten years ago when the play made its debut. Regardless of age, the play understands the culture of internet friendships and bonds very well. It shows both the value of life in the online world and the necessity of offline living. This wealth of understanding of internet culture is due to Hudes sending many letters while growing up and later transitioning to emails in college. This was so she could communicate with her husband-to-be over long distances (Hudes). There are many studies on the effects of spending too much time online. There are also plenty of discussions over concerns that people are forgetting how to communicate with others offline. Still, there is strikingly little in regards to the way relationships develop and are fostered in an online world. Hudes presents a very honest look at how people communicate and behave online, and she does not shy away from both the good and the bad of life online.

Fleming and Jordan had the opportunity to network with other students from universities across the state and learn about their research. Fleming said of the experience, “There were a number of impressive researchers that pushed me to be on my ‘A-game’ Although it was virtual, the session was filled with energy as we got a chance to interact with students from other prestigious institutions, sharing and imparting knowledge on our papers.”

The SNCURCS is open to all undergraduate students enrolled in NC colleges, universities, or community colleges, and high school students who have completed a monitored research project through an accredited university or research program. Presentations include oral, poster, and performance options. This was the fourth straight year that majors from Chowan have presented at this prestigious state symposium under the mentorship of Dr. Timothy Hayes, Chair, Department of English.

Please join Chowan University in congratulating Asuntha and Glenn. Both of their recorded presentations can be viewed here.